Application databases are generally designed to only track current state. For example, a typical users data model will store the current settings for each user. Each time they make a change, their corresponding record will be updated in place:

This makes a lot of sense for applications. They need to be able to rapidly retrieve settings for a given user in order to determine how the application behaves. An indexed table at the user grain accomplishes this well.

This is known as a Type 2 dimensional model. In this post, I’ll show how you can create these data models using modern ETL tooling like PySpark and dbt (data build tool).

I currently work at Shopify as a data scientist in the International product line. Our product line is focused on adapting and scaling our product around the world. One of the first major efforts we undertook was translating Shopify’s admin in order to make our software available to use in multiple languages other than English.

At Shopify, data scientists work across the full stack - from data sourcing and instrumentation, to data modelling, dashboards, analytics and machine learning based products. As a product data scientist, I was responsible for understanding how our translated versions of the product were performing. How many users were adopting them? How was adoption changing over time? Were they retaining the new language, or switching back to English? If we defaulted a new user from Japan into Japanese, were they more likely to become a paying customer than if they were first exposed to the product in English and given the option to switch? The first step in the process of answering all these questions was figuring out how our data could be sourced or instrumented, and then eventually modelled into a format that allowed me to answer these questions.

The functionality to decide which language to render Shopify in is based on the language setting our engineers had added to the users data model. Also living in this model were a bunch of other fields we will ignore.

So User 1 would experience the Shopify admin in English, User 2 in Japanese, etc.. Like most data models powering Shopify’s software, the users model is a Type 1 dimension. Each time a user changes their language, or any other setting, the record gets updated in place. As I alluded to above, this data model format doesn’t allow us to answer many of our questions as they involve knowing what language a given user was using at a particular point in time. Instead, I needed a data model that tracked user’s languages over time. There are several ways to approach this problem.

In an ideal world (from an analyst’s perspective), the core application database model will be designed to track state. Rather than having a record be updated in place, the new settings are instead appended as a new record. Because the data is tracked directly in the source of truth, you can fully trust its accuracy.

If you’re working closely with engineers prior to the launch of a product or new feature, you can advocate for the need for tracking historical state and have them build the data model accordingly. However, you will often run into two challenges with this approach:

In the user language scenario discussed above, the language field was added to the pre-existing users model, and updating this model design was out of the question.

At most technology companies, snapshots of application database tables are extracted into the data warehouse or data lake. At Shopify, we have a system that extracts newly created or updated records from the application databases on a fixed schedule.

Using these snapshots, one could leverage them as an input source for building a Type 2 dimension. However, given the fixed schedule nature of the data extraction system, it is possible that you will miss updates happening between one extract and the next.

If you are leveraging dbt for your data modelling, and are comfortable with only capturing events whenever snapshots are taken and your dbt job runs, you can leverage their nice built-in solution for building Type 2’s from snapshots!

Another alternative is to add a new event log. Each newly created or update record is stored in this log. At Shopify, we rely heavily on Kafka as a pipeline for transferring real time data between our applications and data land, which makes it an ideal candidate for implementing such a log.

If you work closely with engineers, or are comfortable working in your application codebase, you can get new logging in place that will stream any new or updated record to Kafka. Shopify is built on the Ruby on Rails web framework. Rails has something called “Active Record Callbacks”, which allow you to trigger logic before or after an alternation of an object’s (read “database record’s”) state. For our use case, we can leverage the after_commit callback to log a record to Kafka after it has been successfully created or updated in the application database.

While this option isn’t perfect, and comes with a host of other caveats I will discuss later, I ended up choosing it for this use case as it was the quickest and easiest solution to implement that provided the required granularity.

Below, I’ll walk through some recipes for building Type 2 dimensions from the event logging option discussed above. We’ll stick with our example of modelling user’s languages over time.

Let’s start with the simple case where we’ve added event logging to our database model from day 1 (i.e. when the table was first created). Here’s an example of what our user_update event log would look like:

This log describes the full history of the users data model.

We can see that the current state for all users can easily be retrieved with a SQL query that filters for WHERE is_current. These records also have a null value for the valid_to column, since they are still in use. However, it is common practice to fill these nulls with something like the timestamp at which the job last ran, since the actual values may have changed since then.

Due to Spark’s ability to scale to massive datasets, we use it at Shopify for building our data models that get loaded to our data warehouse. To avoid the mess that comes with installing Spark on your machine, I’ll leverage a pre-built docker image with PySpark and Jupyter notebook pre-installed. If you want to play around with these examples yourself, you can pull down this docker image with docker pull jupyter/pyspark-notebook:c76996e26e48 and then run docker run -p 8888:8888 jupyter/pyspark-notebook:c76996e26e48 to spin up a notebook where you can run PySpark locally.

We’ll start with some boiler plate code to create a Spark dataframe containing our sample of user update events.

With that out of the way, the first step is to filter our input log to only include records where the columns of interest were updated. With our event instrumentation, we log an event whenever any record in the users model is updated. For our use case, we only care about instances where the user’s language was updated (or created for the first time). It’s also possible that you get duplicate records in your event logs, since Kafka clients typically support “at-least-once” delivery. The code below will also filter out these cases.

The last step is fairly simple. We produce one record per period for which a given language was enabled.

dbt (data build tool) is an open source tool that lets you build new data models in pure SQL. It’s a tool we are currently exploring using at Shopify as an alternative to modelling in PySpark, which I am really excited about. When writing PySpark jobs, you’re typically taking SQL in your head, and then figuring out how you can translate it to the PySpark API. Why not just build them in pure SQL? dbt lets you do exactly that:

Scenario 2: event logging is added to an existing model

The example outlined above is the ideal scenario: we can solely leverage the user_update event log since this has recorded all changes since day 1. Unfortunately, this is not the common case. Usually we have an existing data model where we want to start tracking changes. To handle this, we need to save a static snapshot of the table, and then only consider user updates that occurred after that snapshot was taken. 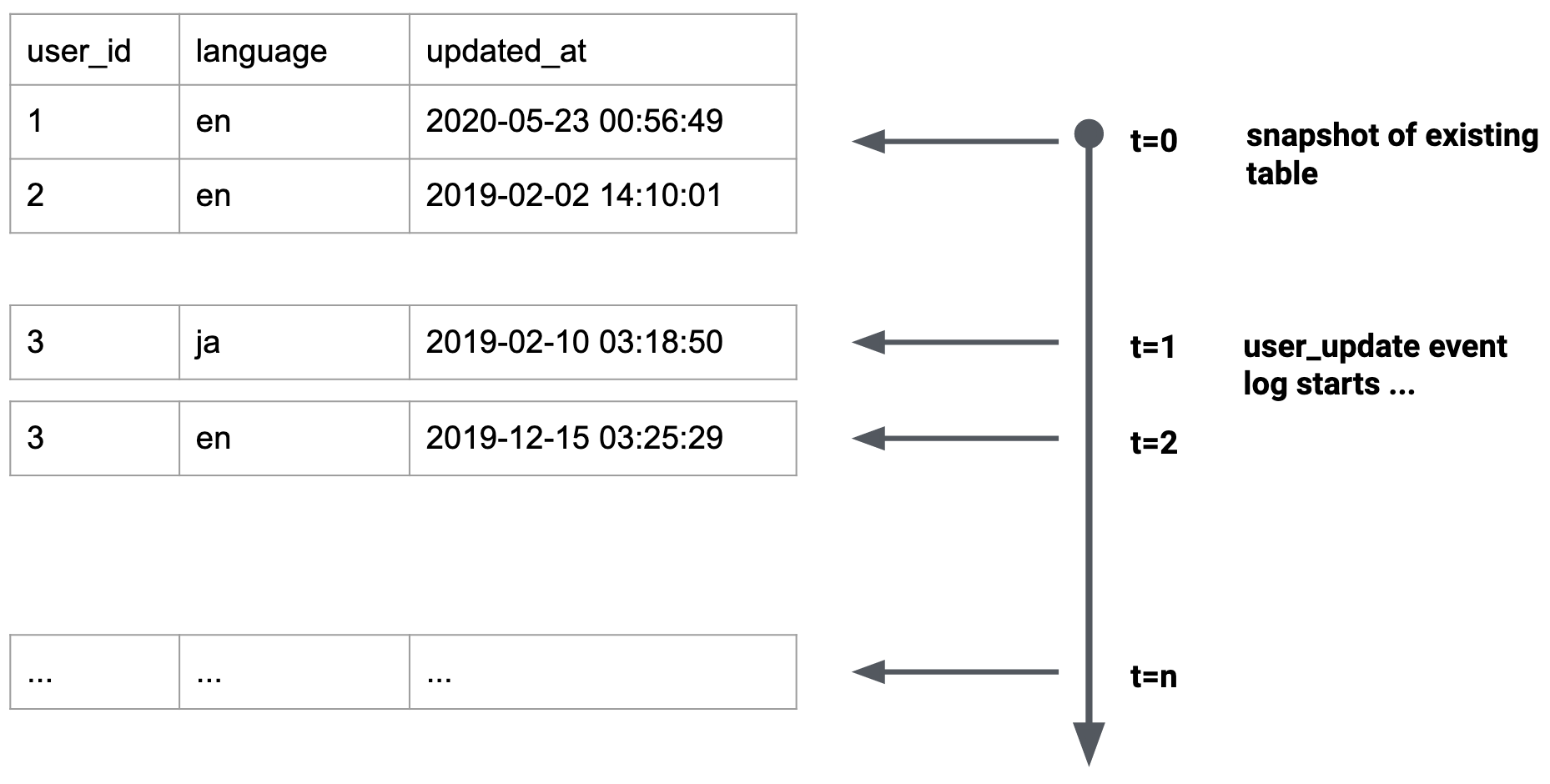 Once you have these two data sources, you can simply union them into a single log, and then follow the same recipes used above.

I’ve leveraged the approaches outlined above with multiple data models now. Here are a few of the things I’ve learned along the way:

This has been an iterative process to figure out, and takes investment from both data and engineering to successfully implement. With that said, we have found the analytical value of the resulting Type 2 models well worth the upfront effort.

Looking ahead, there’s an ongoing project at Shopify by one of our data engineering teams to store the MySQL binary logs (binlogs) in data land. Binlogs are a much better source for a log of data modifications, as they are directly tied to the source of truth (the MySQL database), and are much less susceptible to data loss than the Kafka based approach. With binlog extractions in place, you don’t need to add separate Kafka event logging to every new model as changes will be automatically tracked for all tables. You don’t need to worry about code changes or other processes making updates to the data model since the binlogs will always reflect the changes made to each table. I am optimistic that with binlogs as a new, more promising source for logging data modifications, along with the recipes outlined above, we can produce Type 2s out of the box for all new models. Everybody gets a Type 2!

Once we have our data modelled as a Type 2 dimension, there are a number of questions we can start easily answering: