A brief discussion about model serving with AWS Lambda and the cold start performance of different setups.

The benefits of serverless offerings from cloud providers are well known at this point. They eliminate the hassle of provisioning & managing servers, automatically take care of scaling in response to varying workloads, and can be much cheaper for lower volume services since they don’t run 24/7. Despite these benefits, serverless options like AWS Lambda have rarely been used for serving machine learning (ML) models due to a few major drawbacks:

Container image support to the rescue?

With the December 2020 announcement of container image support and a new 10GB RAM limit, I got a renewed sense of hope for AWS lambda to be a more viable option for serving ML models. With this release, you can now have your Lambda function run within a Docker image of your choosing. All the libraries you need can be installed directly in your image, as long as your total image size remains below 10GB. No more worrying about incorrectly compiled or large Python libraries. Need to serve a 2GB TensorFlow model? Go for it.

The only question remaining was whether cold starts would still be an issue in this setup. Perhaps having a model that is baked into the docker image and loaded from disk, rather than S3, could mitigate this? Let’s find out…

In order to do some performance benchmarking, I first trained a simple GBM to predict whether income would exceed $50K/yr based on some census data3.

By fiddling with the n_estimators and max_depth hyperparameters, I created three different models that were 140MB, 420MB and 1090MB on disk.

I used Flask along with Zappa, which recently added support for Docker deployments, to serve and deploy my ML API endpoint, but you could easily use a different set of frameworks. The app contains a single /predict endpoint which returns the prediction and corresponding probability:

As you can see, the model will get loaded from disk or S3 depending on how we set the MODEL_SOURCE environment variable. We’ll test out two different configurations:

In order to come up with some performance benchmarks, I used locust, an open source load testing tool written in Python. My locustfile.py setup looked like this:

This defines a “user” who will make a request to our ML prediction endpoint every 3-5 seconds with the same payload. Using the locust CLI, I then ran the following command to trigger a headless locust test:

This command will spawn 100 users in 5 seconds (spawn rate of 20 users/second) and let those users execute requests for 60 seconds. From the locust generated plots below, you can see that this results in ~25 requests per second. 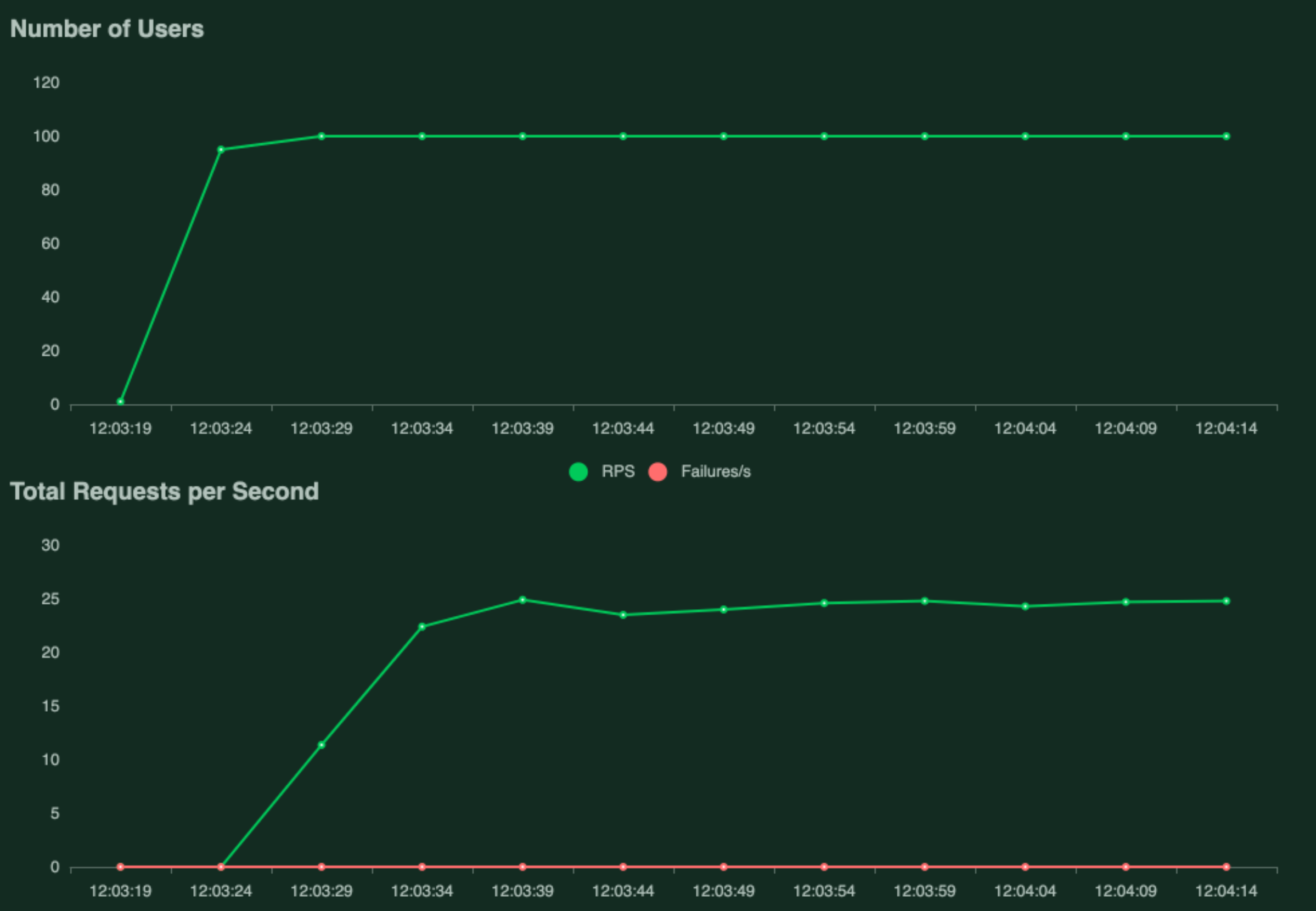 This command will output a bunch of files, including a log file DOCKER_DISK_v1_locust_logs.txt that looks like this:

This can then be easily consumed and parsed in Python to get the distribution of performance 4.

A typical run of the locust load test I described above would have a profile like the one in the graph below. In the first 15 seconds the 100 users all spawn and start making requests. In response to the increased demand, AWS Lambda immediately starts provisioning new Lambda instances. During the load tests I ran, it would spin up 100 functions that could then concurrently process requests. During these first 15 seconds, you can see the p95 and max response times taking between 6-11 seconds. For the duration of the test, the response time distribution narrows as the p95 and max response times become closer to the median, since all the Lambda functions are warmed up.

This particular performance run was for the Docker image that loaded a 140MB model from disk. You can see the cold starts (defined as any response time > 1000ms) were just under 6 seconds on average. 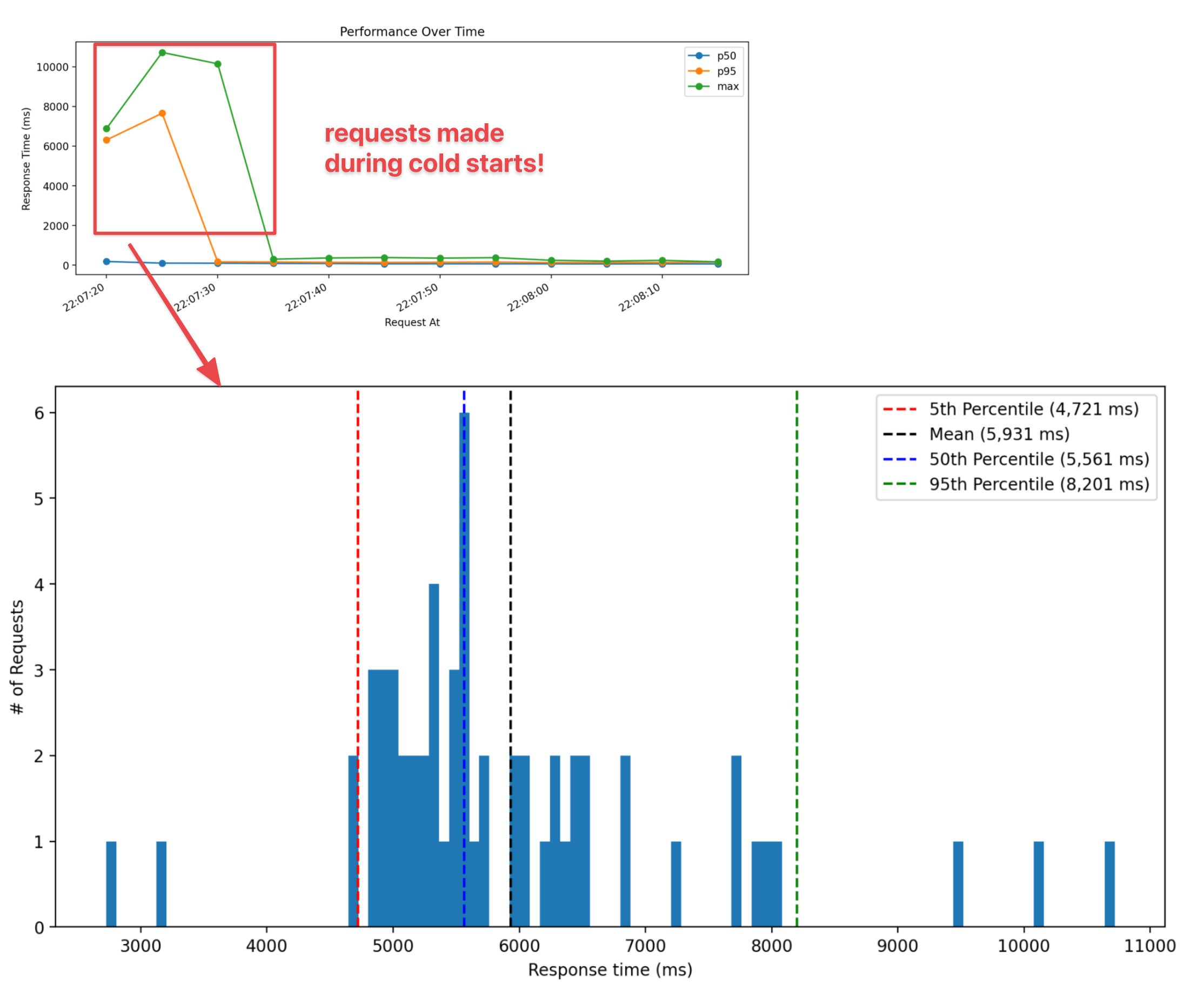 Once the Lambda functions were warmed up, average response times were under 90ms! 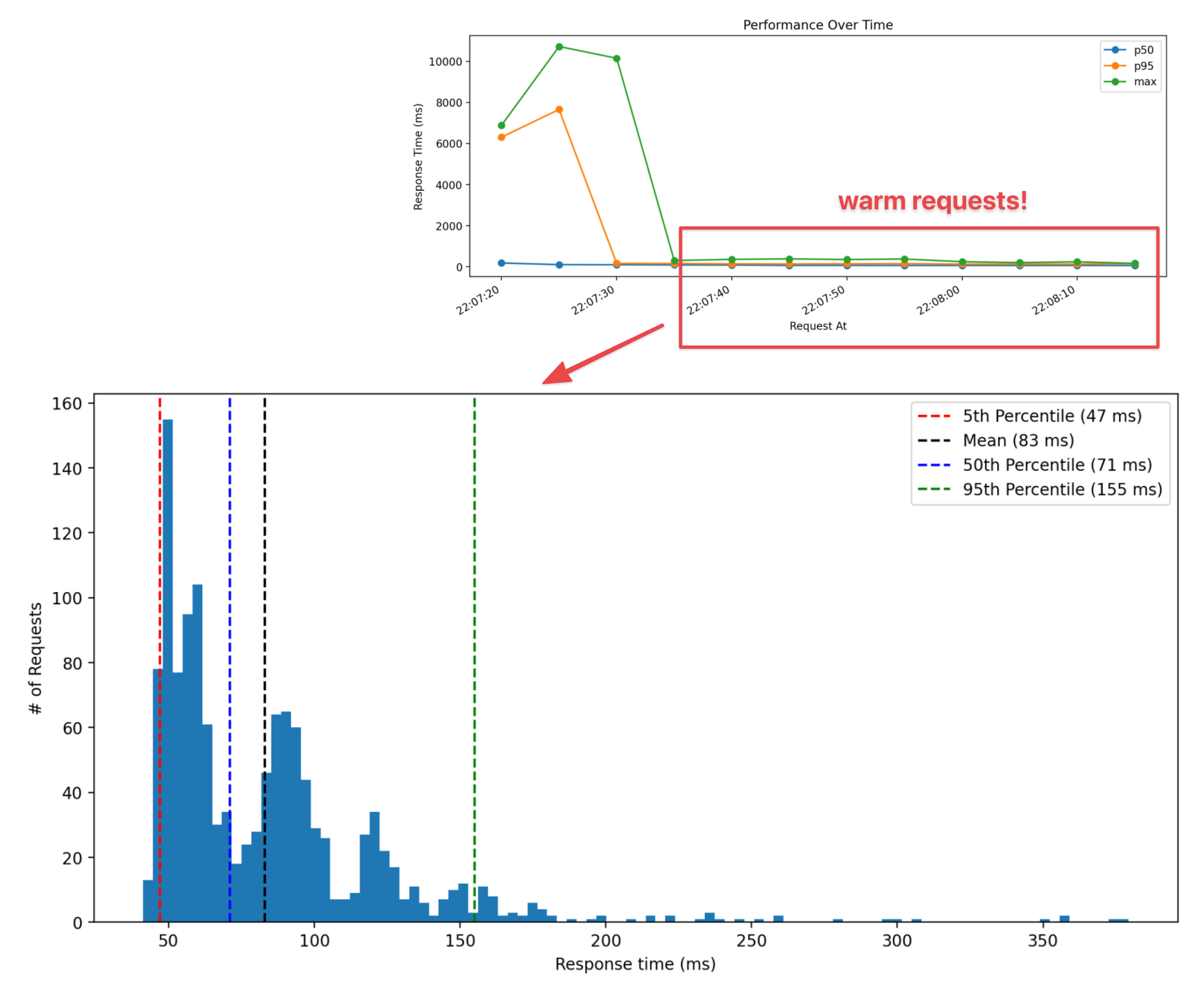 When load testing a newly deployed Lambda function, the cold starts will be considerably longer than what I showed above. Here’s a profile from one of the load tests for the setup where the 140MB model was loaded from disk. As you can see, there’s a bimodal distribution where a bunch of cold starts are in the 5-7 second range and the other set are >25 seconds! 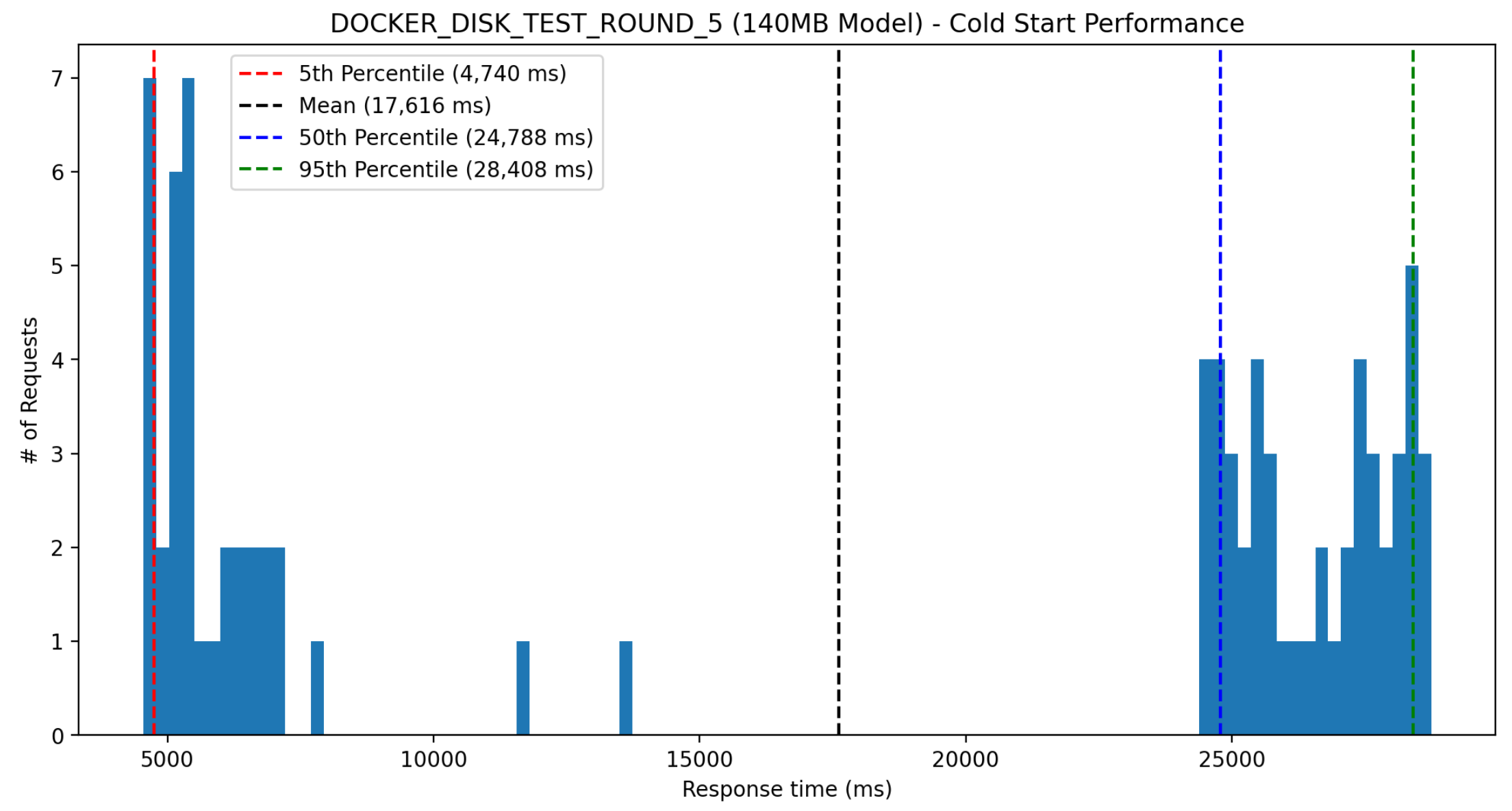 From my reading AWS has a huge docker cache on each server to help speed things up. They also can run a container without loading the entire container.

My guess is that these “super cold starts” occur when the cached Docker image is not available, and must be downloaded. After waiting ~15 minutes and running another load test on the same Lambda function, I would no longer see these super cold starts, which seems to support this hypothesis. It’s worth noting that for whatever reason, the other setup I tested where the model was loaded from S3 instead of being baked into the Docker image had significantly shorter super cold starts, despite the docker image only being ~25% smaller.

Here’s a summary of the cold start performance from all the load tests I ran for each model setup. Cold starts were identified as any response taking longer than 1000ms. Both setups perform the same once the Lambda’s are warm, so it’s not worth comparing those response times. As a reminder:

All values shown are in milliseconds.

The container image support release has made AWS Lambda a much more attractive option for serving ML models. Deploying and updating a serverless ML endpoint is much simpler and a less risky process as a result. However, container image support did not solve the cold start problem. In fact, it appears to have made it worse. Even though cold starts will only affect a very small fraction of users, the experience for those users will be abysmal: waiting between 5 and 30 seconds for a response. If you are using a Docker based Lambda function for any web service, you should consider using their provisioned concurrency5 functionality in order to prevent these long cold starts.

All the supporting code for this post can be found in this repo.

[1] I’ve never used used layers in my Lambda deployments, but the idea does not sound great to me. Tensorflow for example is over 400MB (ref), so would have to go into its own layer with nothing else.

[2] According to this article, containers will not get re-used after 15 minutes of inactivity.

[3] Dataset originally from here, but I ended up using this copy which combined the train & test datasets into a single file. Full model training code available here.

[4] See the code in this notebook. It looks something like this: 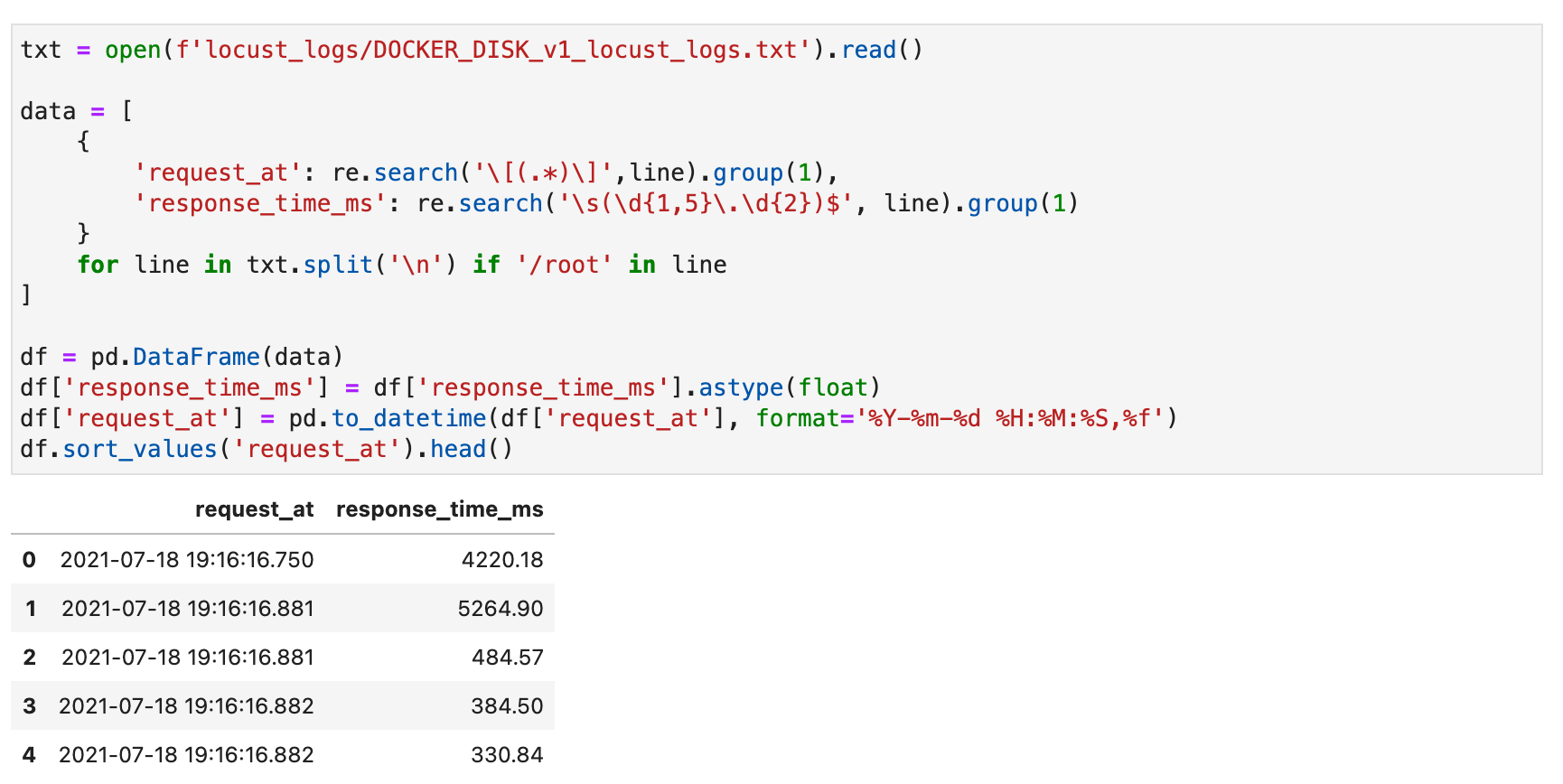 [5] Using provisioned concurrency will significantly increase costs. Ideally, AWS would only start directing requests to the new instances once they are warm when autoscaling, which would reduce the need for this…An untested workaround you could try as a cheaper alternate: schedule a separate lambda function that runs every 10 minutes and fires off X simulataneous requests (use locust!). This should cause X new lambda functions to spin up, and in theory they’d stay warm for the next 15 minutes. X would be the desired number of Lambda functions available to serve requests.