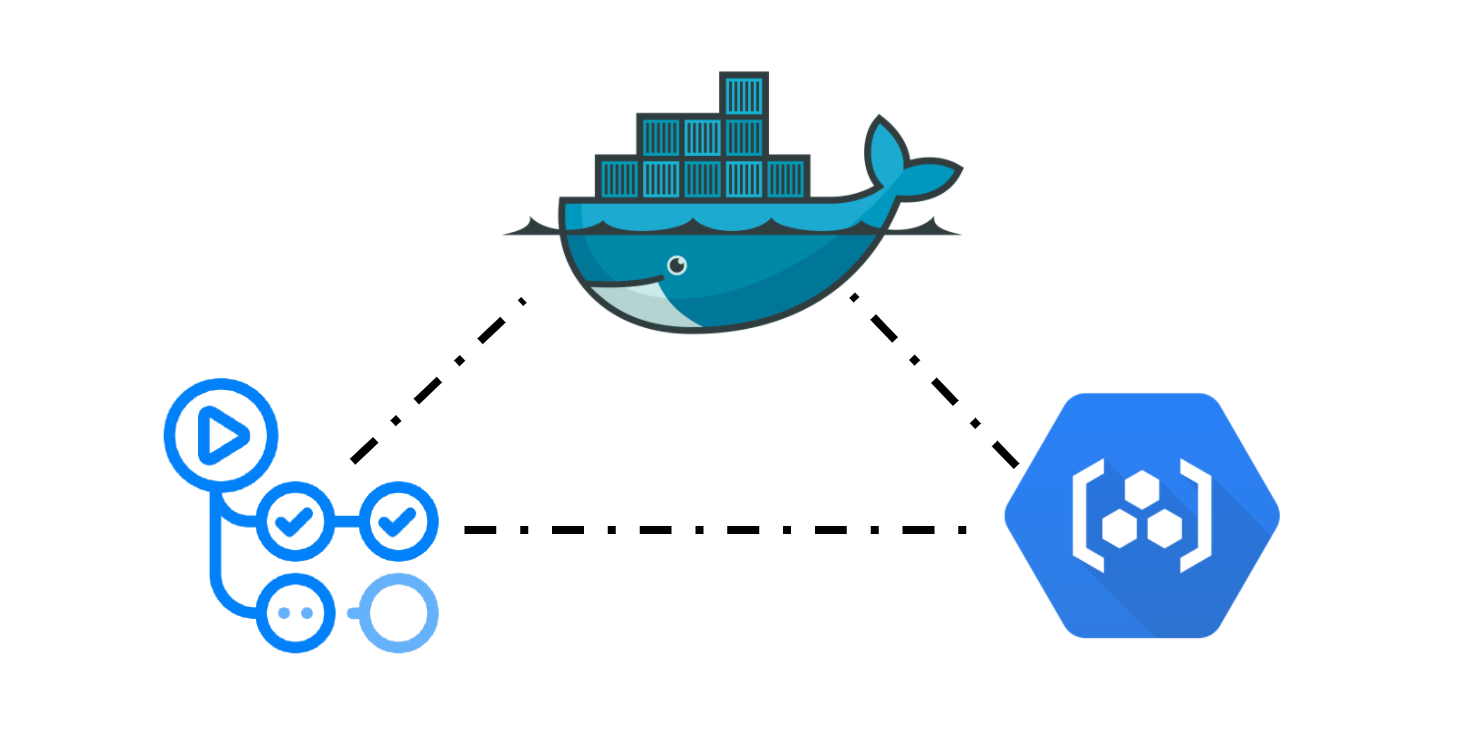 I’ve recently been using Docker to package up my Python environment for deployment in a Dask cluster on Google Cloud Platform (GCP). If you’re spinning up Dask clusters in an active codebase, you’ll want to make sure you’re regularly updating your Docker image with the latest dependencies and code. To avoid the hassle of manually rebuilding your Docker image whenever things change, I recommend creating a simple Github Actions workflow that rebuilds your Docker image automatically. This can be configured to run whenever a new commit is pushed to master or a development branch, or any other events that trigger a workflow.

In this example, I’ll be using Google’s Container Registry (GCR) product to host my Docker image due to its tight integration with Google Compute Engine, but this workflow can easily be extended to push your image to any registry.

In order to let Github Actions push to your GCR repository, you’ll need to create a service account with the required permissions and roles. I’ll show you how to do this from the GCP console, but you could accomplish the same thing directly from the command line with the gcloud CLI.

First, create a new role from the IAM & Admin section of the GCR console. You can see the list of 8 storage permissions the role has access to. I arrived at this set through a trial and error process where I kept incrementally adding new permissions until the workflow succeeded without a permission error (doing my best to respect the principle of least privilege). 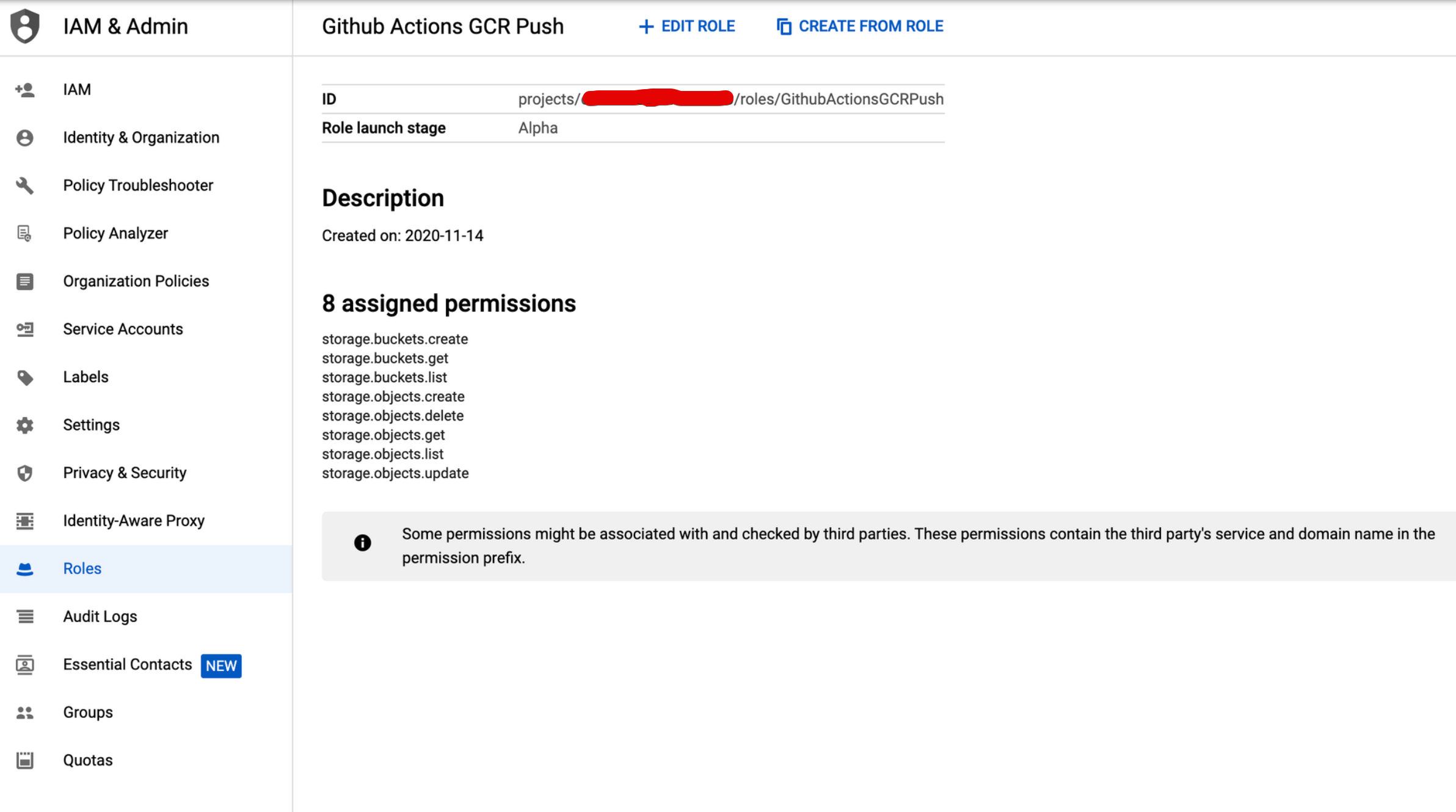 Next, create a new service account with a meaningful name: 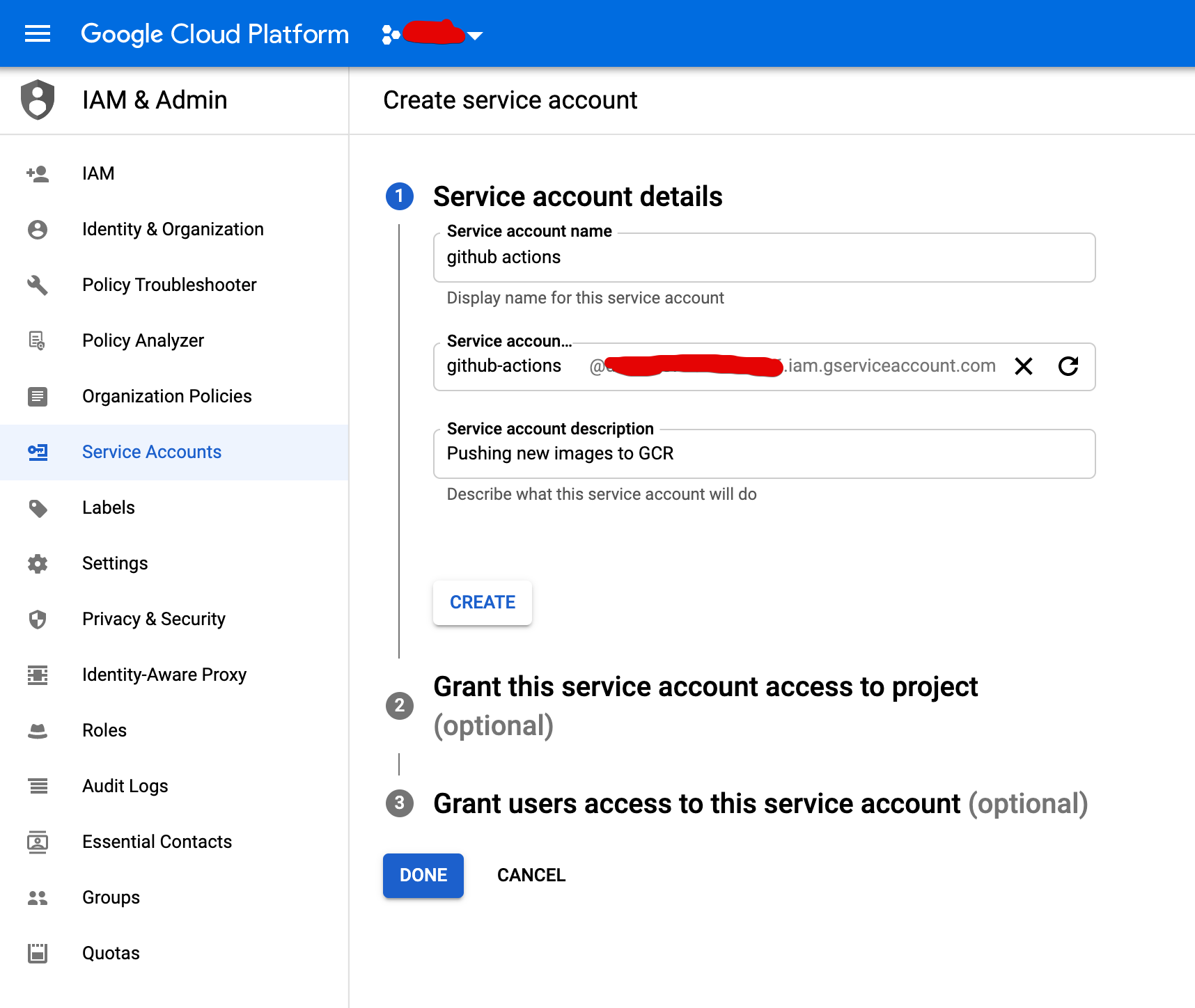 And then attach the role you just created: 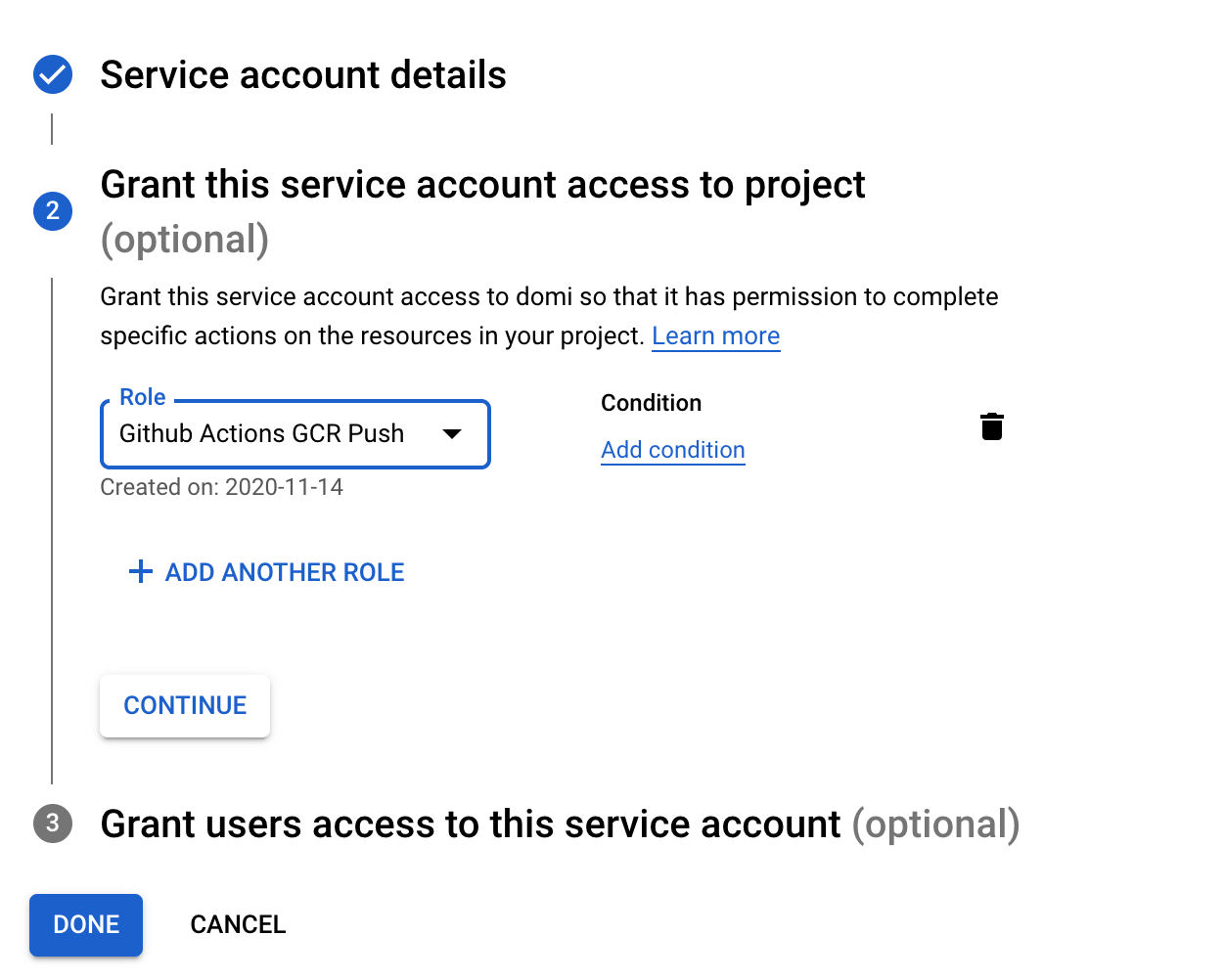 I didn’t grant any user access in step 3. Once that account is created, you can create a new private key by clicking “Add Key” at the bottom. Be sure to select the JSON format when presented with the option. 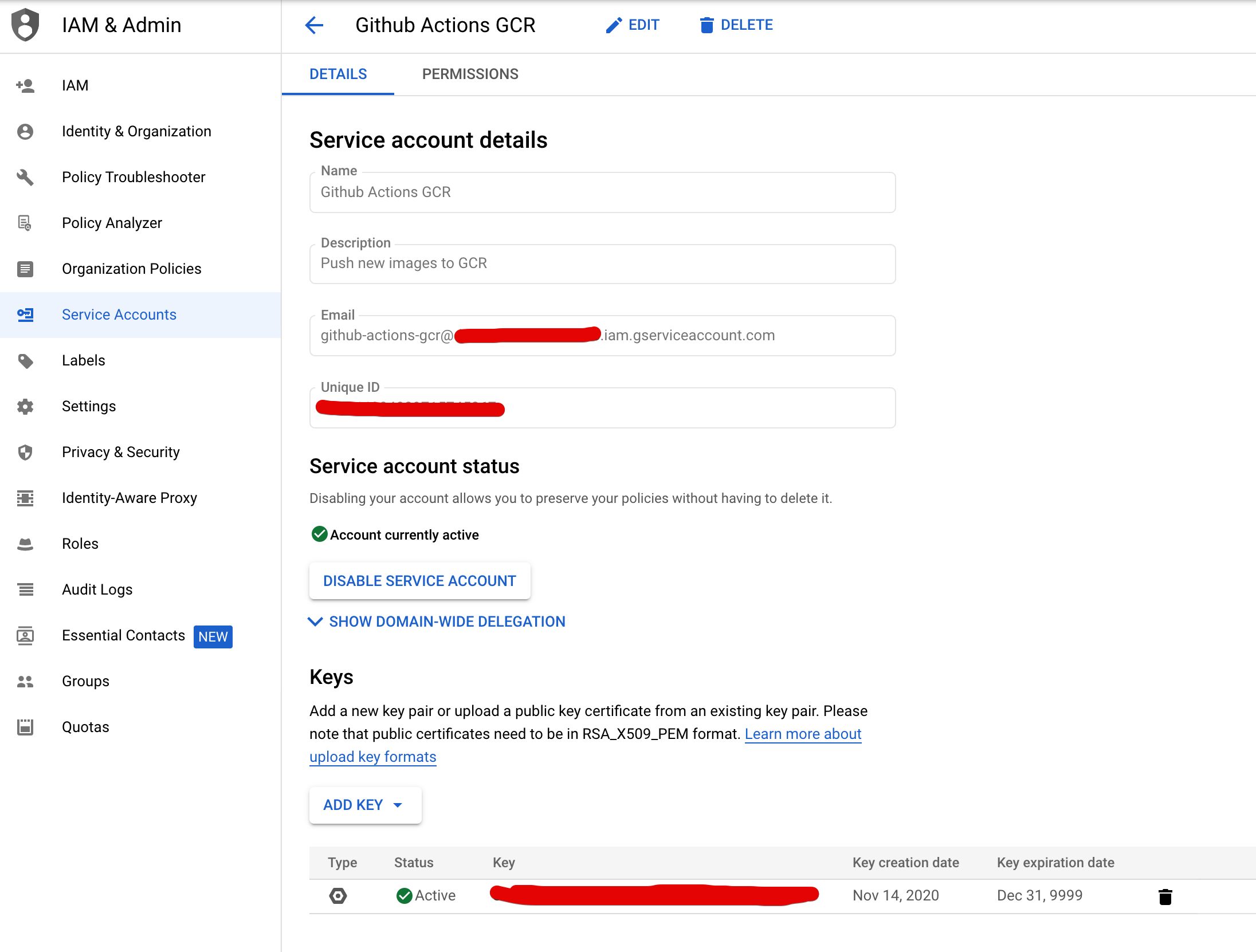 We’ll need to store this private key you just created as a secret in our Github repository. After downloading this JSON key file to your local computer, you can run the following command (if you’re on a Mac) to copy the encoded contents of the key to your clipboard:

You can then create a new secret in your Github repository, GCP_SERVICE_ACCOUNT_KEY, and paste in those contents. It’s also good practice to keep your GCP project ID private as well, so I usually store that as another secret, GCP_PROJECT_ID.

With those in place, you can leverage the setup-gcloud custom action the Google team maintains to setup and authorize the gcloud CLI in your Github Actions workflow. Running gcloud auth configure-docker then configures Docker so that you can push directly to your GCR repository.

Here’s an example workflow that builds & pushes a Docker image to GCR on every commit to master: